I See the Light

I SEE THE LIGHT!

2 finals down, 2 more to go…tomorrow night at 7PM I’ll be done with the hardest semester of classes I have ever experienced!  Can I get an AMEN?!

On Monday, I was feeling extremely stressed out.  The fun holiday weekend was over, which left me with no groceries in the fridge, tons of studying ahead of me, and an Easter-candy-induced stomach ache.  I considered skipping my workout, but as soon as I walked in the door from my class, Corey was in workout clothes and convinced me to head out for a run with him.  I felt much better afterwards, and I was happy to get in a little sweat sesh to relieve some stress.

Tuesday, however, was way too busy, so I did end up taking the day off from working out.

After all the rich food and pounds of candy that was devoured over the weekend, my body was craving something healthy for breakfast ! On Monday, I whipped up some scrambled egg whites with chopped green pepper, topped with a little salsa. 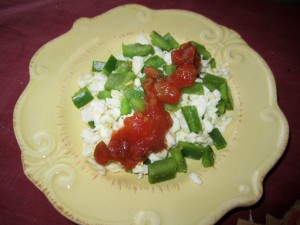 Yesterday brought about the return of my breakfast smoothie!

I love the addition of cooked oats- it thickens up the smoothie, and makes me stay full for much longer.

On Monday, I didn’t have much to work with in the lunch department.  I ended up putting together a little snack plate for lunch, including rolled up turkey, swiss cheese and Dijon mustard, with pear slices. 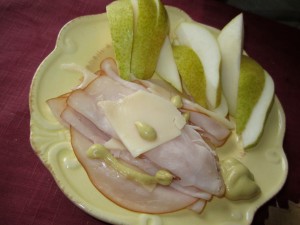 Yesterday’s lunch was a 6-inch Turkey sub from Subway, which was the remainder of a footlong that I got on Monday for dinner. My sub included lots of veggies: spinach, tomato, green pepper, banana peppers, and pickles.  Pickles are vegetables.

Monday’s dinner, like I said, was the other half of the above sandwich from Subway.  Corey and I decided to grocery shop Monday night, but decided we weren’t in the mood to wait for dinner to cook, so we walked over to grab sandwiches, instead.

Last night, I was craving pasta like whoa.  I have a new theory- I think that studying really hard for many hours is the equivalent to your body of running long distance.  Anytime that I study for more than a few hours, I feel exhausted and starving, as if I just worked out really hard!  Anyone have any thoughts on that?

I’m sure that my theory isn’t right, but it makes me feel a lot better to pretend that studying burns the same amount of calories as running, so let’s just go with it.

I tossed the pasta with 1/3 cup Publix Fresh Basil and Tomato Marinara and 1 tablespoon of Philadelphia Cooking Creme in Savory Garlic, to make it a little creamier, sort of like vodka sauce- minus the good part.

I cut the chicken into bite-size pieces and topped the pasta with it. 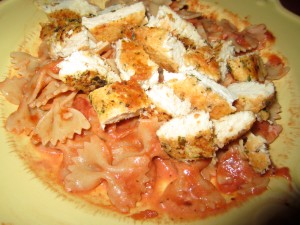 This definitely hit the spot, and made me feel re-energized.  Which turned out to be a bad thing, since I ended up going to bed about 30 minutes later.

One thing I’m really looking forward to in my post-school life is going back to eating dinner at a normal time!  It’s never a good idea to go to bed full of pasta.

Back to the grind!

There’s really nothing better than a recipe that requires minimal ingredients and comes together in less than 15 minutes.  Especially when you happen to be taking classes at night that have you walking in the door around 10p.m. Monday through Thursday. Not the ideal situation for someone who likes to spend some time in the kitchen, but I’m making it work!

Because of my schedule, it’s essential that I have recipes on hand that are simple and healthy.  I really hate to have to grab fast food or order take out just because it’s late and I don’t want to wait any longer to eat dinner.  Enter: 10-minute stir fry.

This recipe is similar to my Shrimp and Brown Rice stir fry, but with much fewer ingredients!

1 bag frozen stir fry vegetables (mine was a mix of mushrooms,

In a wok or large skillet, spray non-stick spray and heat over medium-high heat.  Throw in the chicken, season with salt, garlic powder and paprika, pour in 1 tablespoon stir fry sauce and cook until no longer pink, about 3-4 minutes.  Add the bag of frozen vegetables and cook for 5 minutes.

Add the remaining stir fry sauce, soy sauce and dressing.  Stir together and cook for another 1-2 minutes.  Serve over brown rice and sprinkle with sesame seeds.

On this particular night, I was in the mood for something sweet (OK, fine, that’s what I’m in the mood for every night after dinner).  Anyways, I picked up a box of Fiber One Banana Nut muffins, and I was excited to try them out as a breakfast treat for the following morning.  I was somewhat expecting them to be dry or bland, probably due to the fact that I opted to purchase them as a healthier alternative to the Betty Crocker box I was holding that called for 2 sticks of butter (my skinny bitch conscience got the best of me).  Well, I’m happy to report that they were delicious!

I may have snagged a few bites when they came out of the oven. 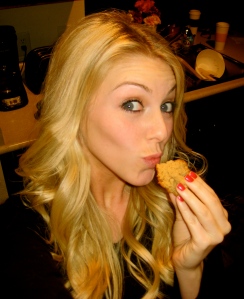