Kid Rockin’ the Night Away…

Last night was so much fun!  We had a great time at the concert, but I’ll get to that later.  Let’s start with breakfast!

Can you tell I’m a creature of habit by now?  I tend to eat pretty much the same thing for breakfast for a week straight…

I am now out of both bananas and strawberries, so I guess this is the last time you have to look at this breakfast (at least for this week!)

After breakfast, we lounged around the house for most of the day.  Around lunchtime, an intense craving for Chick-fil-a came upon us, so we headed out to grab some food and do a little shopping!

I don’t know what my problem was yesterday, but I kept forgetting to snap pictures of my food!  Here is what my lunch looked like:

I had a grilled chicken sandwich on a wheat bun.  I also had some waffle fries, because you can’t go to Chick-fil-a and not have waffle fries.  If you’ve never had it before, Chick-fil-a has “Chick-fil-a Sauce”, which is basically their version of honey mustard.  It. is. amazing.  I could probably take a bath in it and not feel weird about it at all.  However, I came to the unfortunate discovery of the calorie content of one little packet….140 calories!  I can easily go through 2 or 3 packets, so this is a habit that will be coming to an abrupt end!  Well, at least, I’ll try...

After we ate, we did some browsing around at Marshall’s and Old Navy.  By the time we got back, it was time to start getting ready to leave for the Kid Rock concert that Corey won tickets to on the radio!  First, we decided to meet our friends, Rocky and Katie at Knight Library for drinks before the concert.

Before we went into Library, we noticed a new place next door called “World Famous Burgers and Beer“.  We decided to stop in and grab a burger.  Again, I forgot to take a picture of our dinner, but that’s mainly because we were so hungry that it disappeared in minutes!  This particular place is kind of like a Subway for burgers, where you get to build your own.  We ordered an Angus burger on a wheat bun with cheddar cheese, lettuce, tomato, pickles and mushrooms, and a side of fries.  We split the meal down the middle, and it was really good!

Even though Corey won tickets on the radio, Rocky and Katie had box seats, and we ended up sitting with them in the box for the concert.  We had so much fun!

The man of the hour

How adorable is this picture I took of Rocky and Katie?

Some of the guys got emotional during one of the songs… 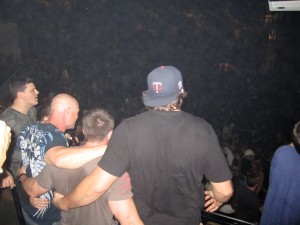 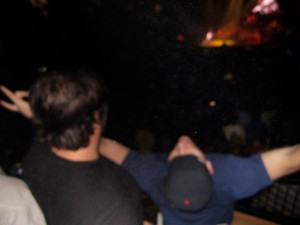 One thing I know is that I absolutely love concerts.  It doesn’t matter who’s it is!  I wouldn’t consider myself a hardcore Kid Rock fan, but there’s just something so exciting and fun about going to a concert and listening to great music.

I’ll never forget my first concert.  I was around 10 or 11, and my neighbor and best friend was going to the NSYNC concert and invited me to go with her at the last minute.  I was in heaven!  Oh, and I can’t forget the life-changing moment where I got to meet Hanson backstage at a concert.  If I recall correctly, I was wearing black velour OVERALLS over a size XXL Hanson shirt, with a safety pin holding up one side of the overalls.  Not to mention I was a fat kid.  I would pay good money to see that picture.

Well, we’re off to enjoy the day!  Hope your weekend is a fun one!

What was your first concert?