Crying Into My Curry

I simply could not get around to blogging last night.

Because I looked like this after watching The Bachelor Finale:

I have never been so overwhelmed with emotion by any TV show in my life!  Brad’s proposal to Emily was so beautiful, they’re so beautiful, it’s all SO BEAUTIFUL! I was a mess! 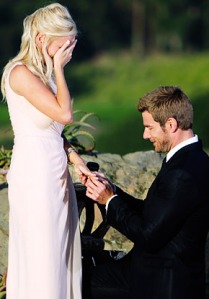 THEN…I watched the “After the Final Rose” show immediately after ending of The Bachelor, and my sobbing turned into pure heartache after hearing all the horrible things Emily and Brad had to say about their relationship post-proposal.

I HATE WHEN SHOWS MAKE ME REALIZE THAT REALITY TV ISN’T REALITY!

Why couldn’t they let me just go on believing that Brad would reel in the moon for Emily, and that Emily’s brain is filled with rainbows and unicorns?!  Ugh.  Needless to say, I went to bed sad, deceived and betrayed by my friend, Reality TV.

After my workout, which can be found here, I ended the weekend’s caloriefest by starting my morning with a Power Smoothie!

Power in a Glass

Into the blender went:

I ran out of my Biggest Loser Protein, so I decided to use just a tiny portion of Corey’s Muscle Milk. Muscle Milk is loaded with calories, but the serving size is for FOUR scoops- I figured I would be OK with just a 1/2 a scoop.  Since I’m in the market for a new protein powder, any suggestions out there? 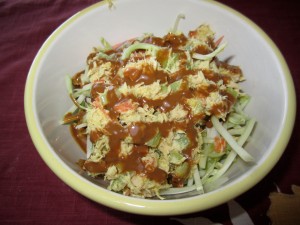 I think I need to invest in some regular lettuce for my salads- the slaw plus the crunchy veggies in my tuna salad made my jaw hurt from chewing so much!

I made my tuna salad with:

The amount I made should last for about 4 servings.

Before I left for class, I decided to get a head start on dinner.  I got out the slow cooker and added

That was it!  I placed it on Low for 5 hours, and when I got home, I removed the chicken breasts and shredded them using two forks: 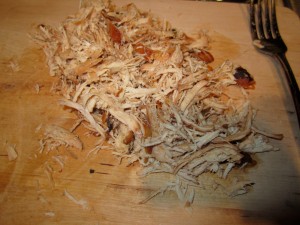 When I was visiting my parents this weekend, my dad gave me some packages of fresh veggies, including a package of brussel sprouts and a package of yellow squash.  When I got home from class, I sliced all the veggies, layed them on a cookie sheet, sprayed them with non-stick spray, sprinkled them with garlic powder and salt, and popped them in a 425 degree oven for 25 minutes until they were nice and browned: 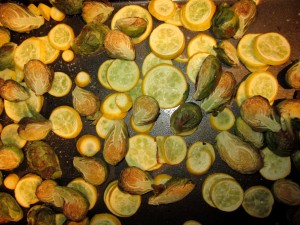 This is my favorite way to cook vegetables!

I used a jar of Thai Kitchen Yellow Curry to bring this meal together:

I brought the sauce to a boil in a pot, and then I threw in the cooked shredded chicken and roasted veggies.  I gave it a stir, and dinner was ready!

I served our curry dinner over brown rice.  I used a packet of Uncle Ben’s 90-Second Ready Rice, which made this dinner even easier. 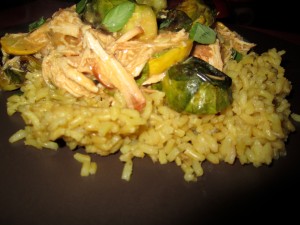 Little did I know that I would soon be sobbing like a 5-year-old into my chicken curry, hence, the title of this post.

If you watch The Bachelor, do you think Brad and Emily will make it?!

I’m sorry, did I leave you last night with the words, “We have fun plans for the next two days!” ???

What I should have said is, “We’re about to have the most boring day ever.”

Corey and I were standing on the metaphorical side of the Highway of Life today, holding a sign that said, “Cocoa Beach or Bust”…and Life sped by us in it’s red Ferrari and gave us the finger.

We DID have plans to go with a bunch of our friends to Cocoa Beach for the next two days, for a fun-filled vacation of sun and sand and frozen drinks…but, instead, we woke up to FRIGID Florida temperatures, clouds, and a late start to the day, that resulted in a cancelled trip.  However, we will salvage some type of Spring Break-y-ness from this week, and we’re hoping to make our way to Cocoa Beach tomorrow, instead.

Breakfast was a bowl full of protein topped with a special treat. 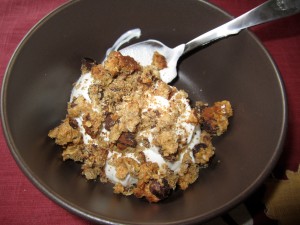 I topped 1 cup of Chobani 0% Vanilla Greek Yogurt with a crumbled Whole Wheat Oatmeal Chocolate Chip Cookies that I made last night.  Delish!

After breakfast, we did a lot of sitting around and debating about our planned trip.  Once we finally came to the conclusion that it wasn’t happening, we headed out for lunch and some random errands.

We headed to Chipotle for one of our favorite lunches:

We both ordered Chicken Salads.  Mine included:

After lunch, we embarked on a bunch of random and pointless “errands”.  The first one was to Best Buy, which I got completely tricked into participating in.  Corey made it sound like they had the new iPad 2 that he wanted to test out- not that that is an acceptable reason to go there, but it would have been better than the real reason we were there- to play with the old iPad, which we have done on more occasions than I care to admit.  After a good half hour of wiping my fingers across what I assume to be the germiest surface I’ve touched since my last Microbiology practical, we left and headed to our next pointless destination- Sam Ash.

Going to Sam Ash, which is a music and instrument store, reminded me of my childhood.  I can remember several times, usually when school was out for summer, that my mom would take my sister and I to music stores to pick out new sheet music for her piano students, and we would always end up playing with all the fun instruments.  Today, I realized how much I miss that part of my life!  For those who don’t know me personally, music is a huge part of my life.  I played the piano for 13 years, took private voice lessons from the age of 10 until I was about 16, and I have been in more choirs than one would consider to be normal.  I spent most Saturdays and Sundays singing for church services and various choral concerts when I was growing up, and I even made some money as a wedding singer in high school.  I actually went to my college because I auditioned and was accepted into their Vocal Performance program, although, I did end up changing my major eventually.  My point is, I miss the thrill of learning a new song and getting to perform it somewhere.  Karaoke is pretty much the only stage I’ve been in quite a while.  I think I will make it a project to learn a new song on the piano in the coming months!  Stay tuned (no pun intended).

For anyone who is interested, here is a link to a video of me singing the National Anthem.

By the time dinner rolled around, we were pretty stir crazy from sitting in the house all day.  Even Bella was annoyed:

"You people BORE ME more than this pink chew toy!"

We were in the mood for a pizza, so we went to one of our favorite pizza places in Winter Park- Mellow Mushroom.

After ordering drinks, we decided to split a Greek salad: 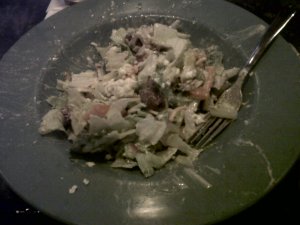 And we also ordered a “Freshy” pizza, which consisted of mozzarella, tomato and fresh basil:

Again, I apologize for the cell phone pictures, but anytime we sit at the bar, I just can’t get up the nerve to whip out my camera!

Seeing that it’s Monday night, there is only one thing that is calling my name right now- The Bachelor!  Hopefully, I’ll have good news to report tomorrow night about a fun trip to Cocoa Beach…fingers crossed!

What is your favorite way to “healthify” a pizza?

Who do you want to win The Bachelor- Chantal or Emily?

Well, this may not be the best way to kick off the documentation of my healthy meals, but, hey- I said I would document it all- the good, the bad and the fattening.

Mondays are always tough.  Corey has class until 8PM, and I don’t usually get back from my own class until 9:30PM.  By the time I walk in the door, the last thing I feel like doing is making dinner.  This is why Corey started a little Monday-night tradition for the two of us.  Drum roll please…

Pollo Tropical and The Bachelor!

I normally get the smaller size, but Corey accidentally got me a large this time.  I definitely could’ve scarfed the whole thing down because I was famished, but I maintained slight self control and split it down the middle.  I saved the other half in the fridge.

To be fair, the smaller size of this meal at Pollo Tropical is pretty low-calorie.  It has around 330 calories.

Later on, I may or may not have had a bowl of Publix Premium No Sugar Added Light Vanilla Ice Cream, topped with half of a crumbled, whole-wheat chocolate chip muffin that I made earlier in the week! 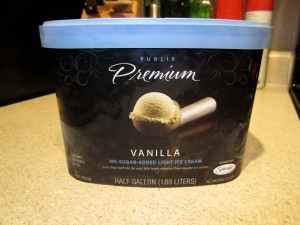 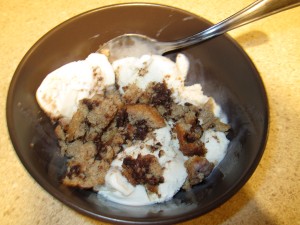 I was planning to post the recipe for the muffins, but they actually turned out to be pretty crappy.  They’ve only been successful as an ice-cream topping.

Now that my hunger and sweet tooth has been satisfied, onto more important things:

King of Romance or Total Tool?

While I’m happy that Michelle is gone, I will definitely miss the crazy that she brought to the show.  But, seriously, Brad needs to just get down to it and send everyone home so he and Emily can start their perfect life together!

Who are you rooting for on this season of the Bachelor?

And for an extra important question from my co-commentator and Bachelor expert, Corey:

Will Emily say “yes” to the fantasy suite next week?!